Vienna/Austria, 1.6.2022 - The seven biggest European airline groups are failing to take sufficient measures to reduce their CO2 emissions in line with the Paris Agreement, according to a new report commissioned by Greenpeace Central and Eastern Europe. While European airlines would need to reduce at least 2% of flights annually by 2040 to be in line with the 1.5°C climate target, none of the companies analysed has annual reduction goals for its greenhouse gas emissions, has committed to reduce flights, or pledged to fully decarbonise by 2040.

The report concludes that there is little to no substance to the claims made by household names such as Lufthansa, Air France-KLM, IAG (including British Airways and Iberia), Ryanair, easyJet, SAS and TAP Air Portugal that they will cut emissions in the future, as companies mainly rely on false and ineffective solutions such as carbon neutrality [1], carbon offsetting [2] and so-called sustainable aviation fuels (SAF) [3] to tackle emissions. Only three of the biggest European airline groups commit to short-term GHG emission reductions within the next five years. One has pledged to reduce emissions by 25% by 2025 compared to 2005, while two others are even less ambitious. In 2019, the seven biggest European airlines alone were responsible for 170 million tonnes of GHG emissions, equivalent to more than the total annual emissions of Norway, Sweden, Denmark and Finland combined.

While aviation is the fastest growing source of transport-related GHG emissions in the EU, under current regulations airlines are not required to decarbonise and reduce flights. The sector even benefits from a large number of free pollution permits from the EU carbon market, is subsidised by public money through tax exemptions, and received over €30 billion in public COVID support funds. Greenpeace calls on the EU to stop tax giveaways for airlines, and bring the sector off its dependency on oil in line with the 1.5°C goal, starting with a ban on short-haul flights and a reduction of business flights that have reasonable train alternatives.

Herwig Schuster, spokesperson for Greenpeace’s European Mobility For All campaign, said: “European airlines are putting up a smokescreen of false solutions that sound great, but keep transport in the EU hooked on oil, distracting from their staggering emissions, lack of credible climate targets and insufficient measures to combat the impacts of flying. Even in the face of a climate emergency, airlines carry on polluting the air and hide their dirty business behind a wall of greenwashing. The EU cannot let the aviation industry get away with their false climate solutions anymore and must bring down emissions, starting with a ban on short-haul flights and a reduction of business flights wherever reasonable train alternatives exist.” 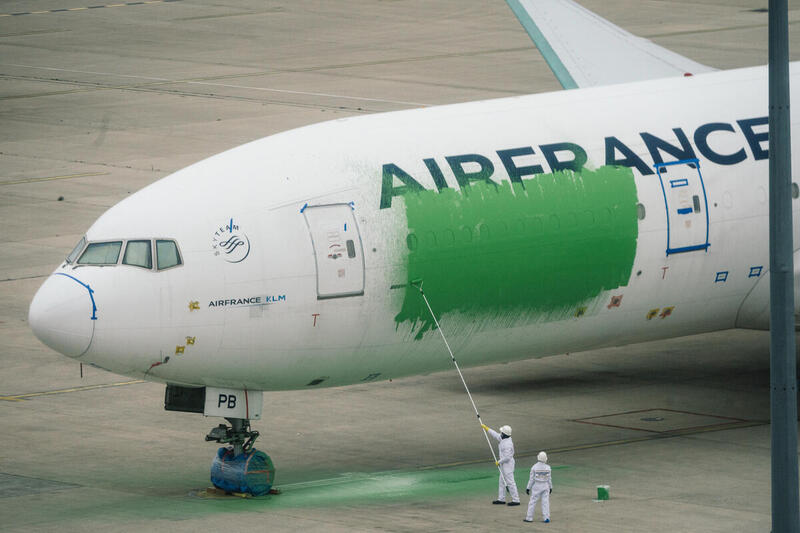 While six of the seven companies analysed either rely on SAF, or plan to use SAF to tackle emissions, none has explicitly excluded the use of harmful agrofuels which are linked with environmental destruction, deforestation, human rights abuses, and food shortages. European airlines overemphasise the use of SAF as a tactic to appear green when in fact this accounted for as little as 0.1% or less of the total annual jet fuel consumption of any airline analysed in 2019. Only one airline explicitly says it invests in the development of e-fuels based on renewables [4].

Against the backdrop of greenwashing and the promotion of false solutions by the aviation and other sectors, Greenpeace, together with more than 30 organisations, is campaigning to legally end fossil advertising and sponsorship in the EU, much like the long-established directive banning tobacco sponsorships and advertisements. If the campaign collects one million verified signatures in a year, the European Commission is obliged to respond to the proposal.

The analysis was conducted by research institute Observatorio de Responsabilidad Social Corporativa based on Environmental - Social - Governance (ESG) criteria that evaluate a corporation’s level of responsibility, commitment and performance. In addition to determining how the companies manage their climate impact, their responsibility towards employees, their lobbying activities, as well as dividends to shareholders and incentives to senior management were assessed. Data was derived from public sources, including annual company reports between 2018 - 2020, and analysed with special consideration given to the public support funds that airlines received during the COVID pandemic. Based on a set of indicators and calculations, researchers set a potential score of up to 100 percent that airlines could reach in each of the respective areas analysed. A low score indicates a low level of responsibility and commitment of the airline in the respective field.

Two years after the beginning of the COVID pandemic and the receipt of over 30 billion Euros in government support for Europe's biggest airlines, the companies analysed have fallen short of introducing explicit and strong commitments for the benefit of the climate. EU governments have failed to secure improvements on ecology, transparency and just working conditions.

[1] Carbon neutrality (or net-zero) is a concept criticised by climate scientists as a “dangerous trap” based on the idea that a polluter can continue to emit CO2 and balance the emissions out by paying someone else to hopefully save emissions in the future, instead of directly reducing emissions. Six of the seven airline groups analysed pledge to become “carbon neutral” by 2050.

[2] Carbon offsets are when a polluter that has emitted greenhouse gases exchanges or ‘offsets’ their pollution with a ‘credit’ for carbon captured by someone else. It is a licence to keep polluting in exchange for carbon credits from e.g. tree planting or nature conservation projects that promise to save emissions in the future. However, research has shown that many of these projects do not actually lead to any savings in emissions: Öko-Institut investigated 5,000 CO2 compensation projects for the European Commission in 2017. Only 2% of these projects actually led to reduced CO2 emissions.

[3] Sustainable aviation fuel (SAF) is an umbrella term for relatively new types of jet fuel that are mostly based on biomass and intended to replace kerosene. Agrofuel is particularly problematic, as it is often linked with the destruction of nature and biodiversity loss, human rights abuses, and food shortages. Before the COVID pandemic, less than 200,000 tonnes of SAF was produced globally, a tiny fraction of the 300 million tonnes of jet fuel needed by commercial airlines in a normal year. The International Energy Agency (IEA) expects that SAF will make up 19% of airline fuels by 2040, leaving 81% fossil-fuel based kerosene.

[4] e-fuel is a new type of jet fuel based on renewable energy (e-kerosene and potentially green hydrogen) that could allow airlines to reduce greenhouse gas emissions over the long term for those drastically reduced and remaining flights that cannot be avoided or shifted to rail. However, with global production of e-fuel making up only about 0.00004% of the total jet fuel needed in the EU in a year, e-fuel is a long way from being available at the scale required. Therefore, the production of e-fuel using 100% renewable electricity must be massively scaled-up in the next couple of years.