Sibenik (Croatia), June 4, 2022 - Since the moment a gas rig mysteriously disappeared in the Adriatic, Greenpeace Croatia activists continue to call out fossil fuel companies INA and MOL as well as the Croatian government to properly investigate what happened. A year and a half after Ivana D collapsed into the sea, activists dived to the wreck to document it and put further pressure on responsible companies. But they discovered more than they expected. 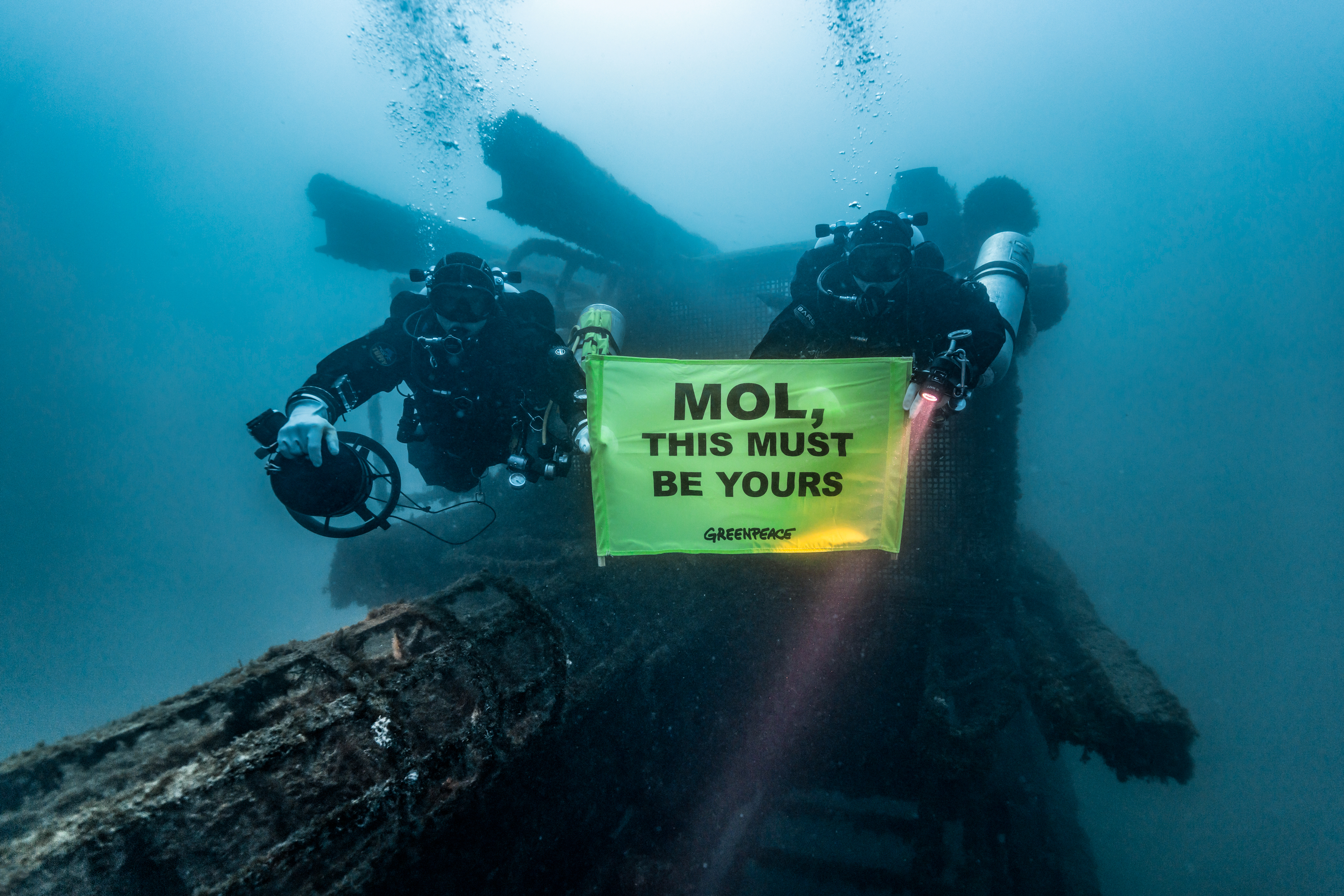 A 65.5 meters high Ivana D, an automated gas platform located about 50 km from the Croatian coast, the afternoon of December 5th, 2020 just disappeared from radars. Days later, the platform was located at the bottom of the sea, some 40 meters under the surface. The first communications were that the monopod snapped due to the storm, and the 520-ton structure sank.

“Fast forward to June 2022 and no report on what exactly caused the accident was provided by national gas and oil company INA, owner of the missing platform. It seems that the Croatian government feels no pressure to clarify what happened because its investigation has been ongoing for over 16 months and until now produced no results. At the same time Greenpeace activists discovered some gas leaks from the rig wreck,” says Petra Andric, fossil gas campaigner in Greenpeace Croatia.

At the beginning of June 2022 the Witness, one of Greenpeace vessels, sailed to the area where Ivana D was located. Activists-divers found the sunken rig and unfolded hand banners in three languages calling Croatian gas company INA and its key Hungarian co-owner MOL to take responsibility for their faulty gas infrastructure. On this occasion activists also noticed repetitive gas leaks. On the video released by Greenpeace Croatia gas bubbles coming from the rusty pipes of the rig are clearly visible.

“This is alarming. INA and the government do nothing else than repeating that the rig poses no danger, is all sealed and safe. The underwater video proves them wrong. There is clearly some gas leak and given that we are talking about a damaged gas rig it would be reasonable to assume that methane may be leaking. We demand that the Croatian government urgently investigates this,” adds Petra Andric.

According to INA’s statements, the last coordinated inspection of Ivana D was completed only two months prior to the sinking. 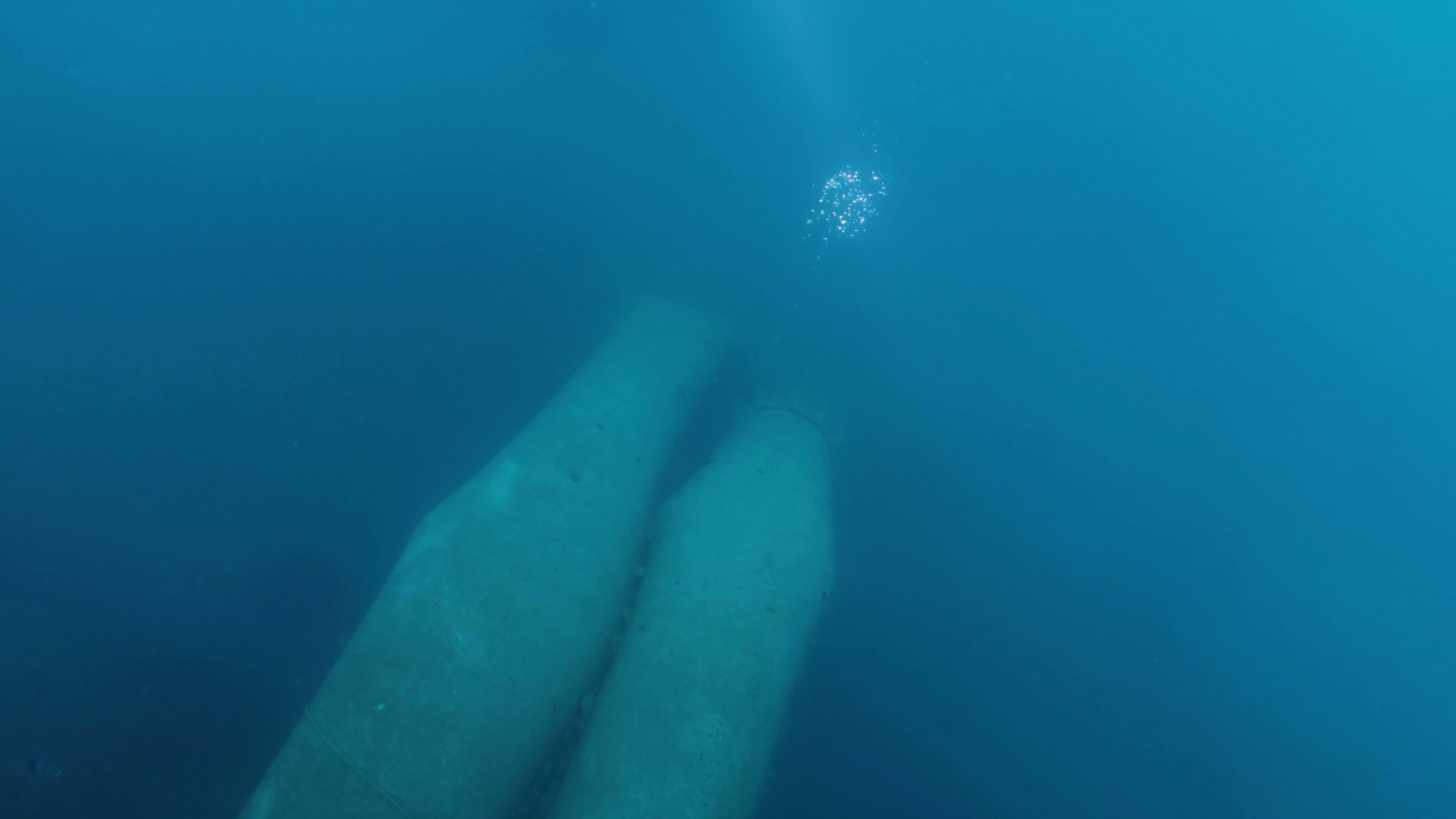 At the press conference held on the deck of legendary Greenpeace ship Rainbow Warrior, currently moored in Sibenik, Greenpeace also called on the Croatian government to take concrete steps and show a genuine will to preserve the environment by conducting a thorough and independent examination of the technical conditions of all offshore gas platforms, as well as any potential methane leaks in them, and informs the public on the actual state of affairs.

“This case reflects the fossil fuel industry’s modus operandi – we take the profits, you take the waste, especially when it’s out of everyone’s sight, but still there. It serves to remind us of the fossil fuel industry’s grip and its politics to the detriment of the environment and the public interest. MOL’s silence as the key co-owner and manager of INA, offers no grounds for optimism in this matter either,” said Eszter Matyas, gas campaigner from Greenpeace Central and Eastern Europe.

“In order to avoid the climate catastrophe, fossil gas must be phased out in Croatia and the entire EU by 2035. We must stop investing in gas and all fossil infrastructure and we must take a strong turn towards renewables and energy efficiency, both of which have great and untapped potential in Croatia,” concluded Petra Andric from Greenpeace Croatia.