Budapest, November 30, 2022 – With the help of young artists and using contemporary dance, Greenpeace has made a moving video to highlight the natural destruction taking place around us and its serious consequences. The production was shot in the Bükk National Park, among the stumps of felled oak trees. The Bükk and the entire North Hungarian Mountains form part of the Carpathians, whose shocking destruction was outlined in an international report issued a week ago by Greenpeace. Now a short film shot there, and its dramatic sequences, shine a light on the fact that the decrease in biodiversity has already reached a level that threatens the survival of our civilisation. The video’s message is actually this burning question: How long does life last? 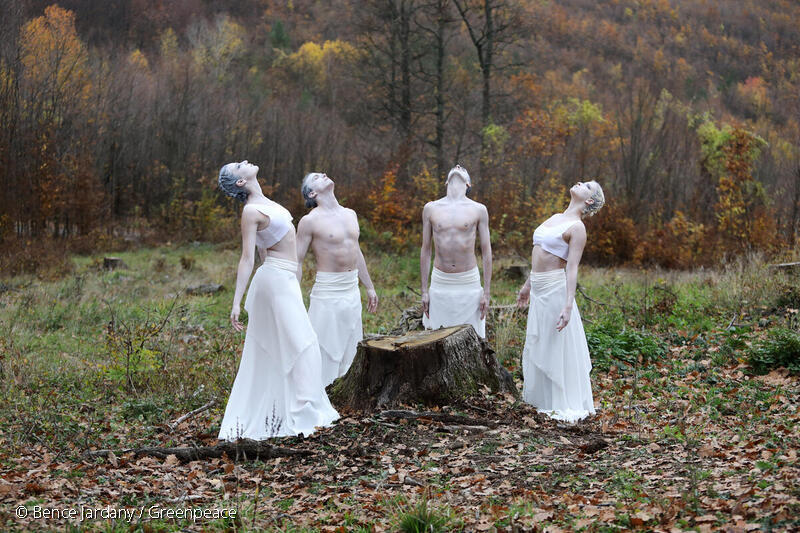 “Both man and trees are part of nature, and this is reason enough for me to consider the forest and the trees comprising it as an analogy for my own being. If we change our way of thinking and the way we relate to nature, we can look at the living world around us in a much richer way, and this was the main thread through this film,” says Zoltán Feicht, the film’s director.

Greenpeace emphasises that the ever-accelerating destruction of nature is already endangering our own living conditions. Today, the extinction of species has accelerated manifold times compared to the average rate in the last ten million years, and nearly one million species are threatened with extinction. Meanwhile, even in most of the protected forests in Hungary, excessively intensive logging is taking place. The government has reduced the institutional network responsible for nature protection to the point of impotence and loosened restrictions on nature protection with its firewood decree, while decision-makers have postponed the adoption of the 2030 National Biodiversity Strategy. To cap it all, the government also wants to make protected natural areas available for sale.

The Greenpeace report published last week also revealed a devastating level of natural destruction in one of Europe's most valuable natural areas, the Carpathians, which Hungary is also involved in. The North Hungarian Mountains are part of the Carpathians, where nature lovers and hikers can see with their own eyes forests full of man-made clearings. It was in just such an area that Greenpeace made its short video.

"Our lives are sustained by billions of organisms whose natural cycles provide us with water, air and fertile soil. If we destroy the living world, it will drag us down with it. Ecological collapse is imminent and as looming a threat as the climate crisis. The two processes are closely related. Species extinction exacerbates climate change, and climate change further accelerates species extinction,” says Katalin Rodics, Biodiversity Campaigner, Greenpeace Hungary.

Greenpeace demands that the Hungarian government should change its course and respect nature by:

Hungary also has work to do in relation to the preservation of the Carpathian forests, since this mountain range spanning eight countries is one of the last refuges of wildlife in Europe, which can only be saved with the co-operation of each country concerned. To this end, Greenpeace has launched an international campaign and a petition, in which it asks decision-makers to immediately ban irresponsible logging in the Carpathians. In addition, with EU funding, an action plan must be created, whose implementation will allow for a network of untouched areas independent of national borders to be created, with no roads and nothing to disturb wildlife.

Greenpeace warns that we must act now. We are all part of nature – our lives are at stake.