PGE GiEK, a company owned by PGE Polska Grupa Energetyczna, has announced that it wants to mediate with Greenpeace Poland, concerning a lawsuit filed by the organization calling on Poland's largest greenhouse gas emitter to carry out a real transformation that will allow the company to move away from burning fossil fuels by 2030. 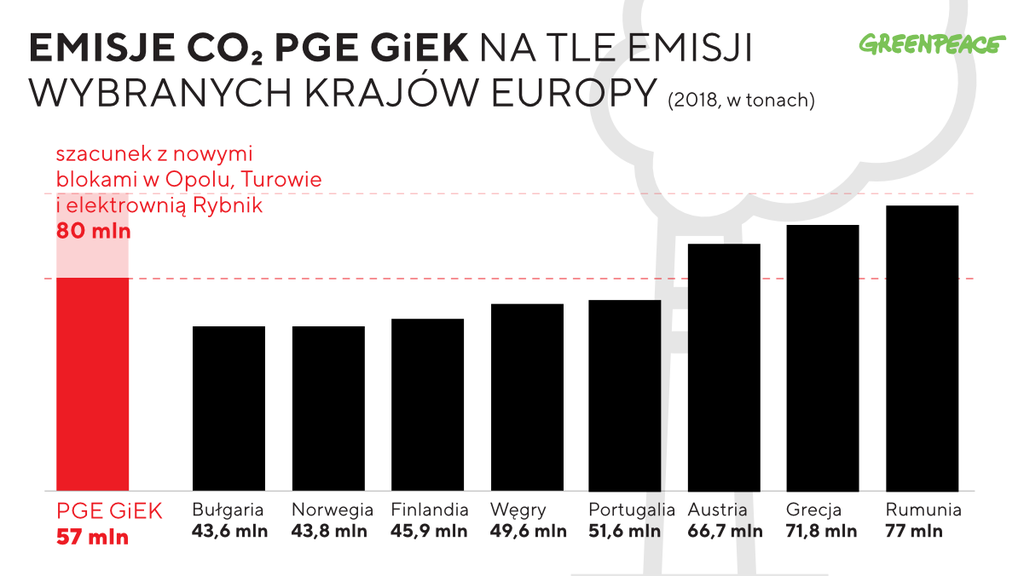 - From the moment the lawsuit was filed, we declared that we are open to conversation, so we’ll sit down at the mediation table with PGE GiEK. However, if the company will maintain the direction it presented in response to our lawsuit, i.e. continue to tell nonsense and myths about the climate and deny its role as the largest greenhouse gas issuer in Poland, then we do not foresee a success of these mediations. Let us keep in mind that we are talking about a company that emits more CO2 than the entire economy of Portugal or Hungary - said Piotr Wójcik, energy market analyst at Greenpeace.

In September, the President of PGE Wojciech Dąbrowski presented the company's strategy until 2050, in which he announced achieving climate neutrality by that time. However, the head of PGE did not present a plan to close off the coal-fired power plants owned by PGE, but only announced that they would be split into a separate, not yet established, state-owned entity.

- Separation of coal assets without a plan to close a power plant is nothing more than shifting dirty investments from one side to another. This has nothing to do with a real and fair energy transition. PGE washes its hands of the responsibility for the Polish energy sector, its future and its employees. The burden of transforming the sector will be transferred to the shoulders of the government and the society. From the perspective of fighting the climate crisis, there is absolutely no change - added Piotr Wójcik.

Piotr Wójcik comments: Our demands, both in terms of protecting Polish women and men from the most catastrophic effects of climate change and those concerning the transformation of the Polish energy sector have strong scientific and economic basis, and their reality is confirmed by transformation scenarios published by experts and even such conservative institutions as the International Energy Agency [2]. The postulate of moving away from coal-based power generation by 2030 and the rapid development of RES and energy efficiency is only consistent with the IPCC report[3] and the provisions of the Paris Agreement, but it does not change the realities in which PGE GiEK already operates. The information available to the public indicates that a large part of the carbon blocks will be closed off by 2035. Thus, Greenpeace demands and setting the year 2030 as the cut-off date for coal abandonment is only an acceleration of an already ongoing and inevitable process. Without a schedule for the closure of coal-fired power plants it will be impossible to plan a fair transition. This process must be accompanied by the dynamic development of renewable energy sources, which will not only offer cheap energy for Polish people and the Polish economy, but will also allow for a real response to the ongoing climate crisis. Let us keep in mind that more than 75 percentOf Polish women and men want to move away from coal by 2030 and PGE should respect that vote.

PGE GiEK is the largest greenhouse gas emitter in Poland. The company's power plants include the Bełchatów, Opole, Turów and Rybnik coal-fired power plants. According to Greenpeace's estimates, after the expansion of its coal assets, the company's emissions could increase from about 57 million tons of CO2 to as much as 80 million tons of CO2 per year. In recent years, the PGE Group has allocated only about 2% of its capital expenditures to renewable energy sources, while intensively expanding its coal-fired power generation.