Inspiring story from Hungary and Croatia, written by Marina Kelava


"We connected as neighbours and became friends”, summarizes Suzana Dobrić citizens’ fight to defend their park in Zagreb’s neighbourhood Savica. After they fought not one but two projects threatening the park’s trees, neighbours from Savica are not strangers anymore. 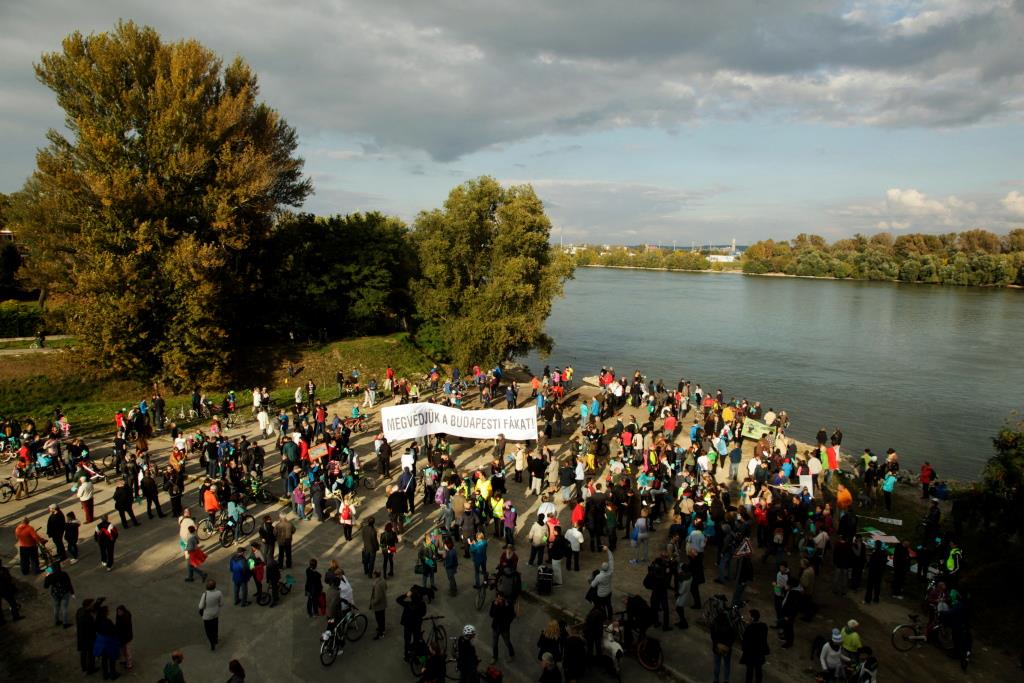 “We don’t even feel the need to go to the centre of the city anymore. We can stop by our neighbours’ houses anytime and share a coffee or a beer”, says Dobrić about the Savica Za Park initiative.

Motivation for this neighbourhood to grow closer happened when city authorities in 2016 gave permits for a church to be built in the only green area which citizens used as a park.

“We were not against the church but not in the green area. We didn’t want to lose our park. When it’s sunny it is full of people and as it is large, it is the only place where children can play safely”, she says.

To stop the project the initiative organized protests and various events for people to get together in the park, but also engaged in a legal fight.

„Maybe the most important protest was when we sent balloons in the air to the height of the planned construction to show how this project would dramatically change this area“, describes Dobrić. 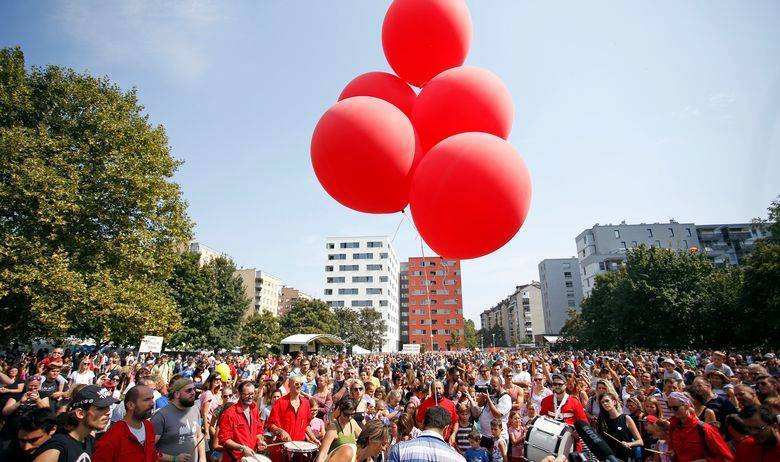 After their efforts this plan was cancelled, but very soon they were forced to defend the park again. The mayor wanted to redesign the park using artificial materials like rubber surfaces and concrete which citizens didn’t accept. They wanted the park to keep its trees and natural look.

“We stood in front of machines and defended the park with our bodies. It took us 45 days of camping in the park for the mayor to give up on his destructive plan”, says Dobrić, one of 12 members of the initiative’s core group.

A destructive construction plan was also threatening to forever change pebbly banks of the Danube River in Budapest. The city government wanted to build mobile-bearing walls in order to protect illegally constructed residential buildings and hotels in the Danube flood plain. The plan included cutting 1500 trees and transforming the existing recreational area by the river in the construction zone for more buildings.

“We want to find a solution without destroying nature”, Évi Kalló says. She is one of the board members of FÁK a Rómain, an activist group from Budapest that managed to protect their piece of nature in Hungarian capitol.

The citizens' fight started in 2013 when they first organized a big demonstration. From the very beginning they have chosen to add a positive vibe to their struggle. After a few years of demonstrations they started organizing various family friendly events to help people reconnect with nature. “We had tree planting events, rowing events, last year we transformed the river bank into a public beach although it is forbidden to swim in Danube. With this action we promoted our aim to open a permanent Danube beach”, says Kallo who joined the initiative in 2016. 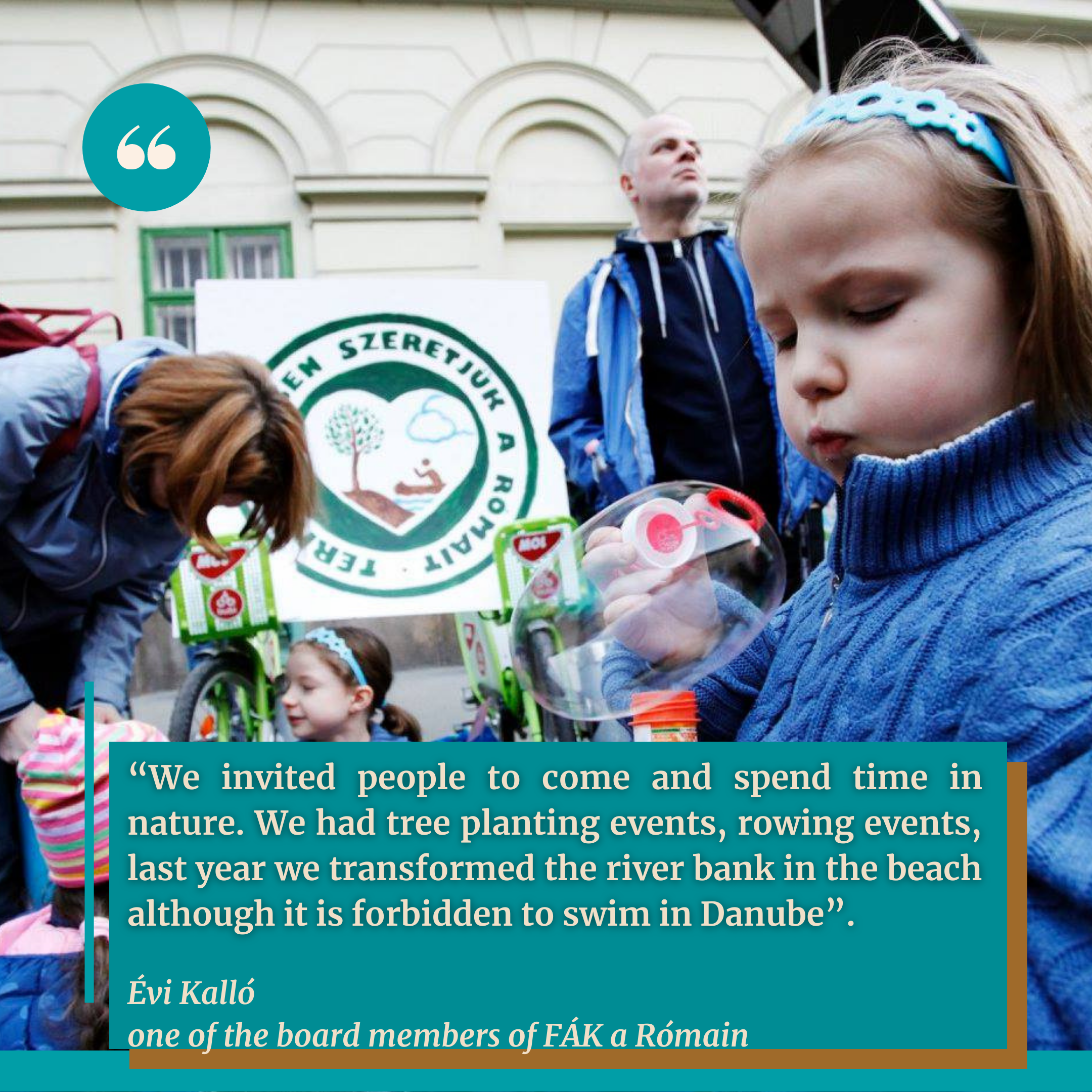 “I live in the residential area a few hundred meters away from the river. I don’t have my own garden and no other nature but Danube. As a rower I spend a lot of time on the river. It was a catastrophe to think that somebody wants to cut numerous trees when we experience climate change in the city”, she says.

Cities in Central Europe like Budapest and Zagreb are already having hotter summers and trees are vital to fight urban heat. Cooler cities are also important for human health since the danger of heat strokes is lowered.

Kallo and her group wanted the current flood protection barriers to be restored, a solution that would not include tree cutting and loss of the natural look of the river bank. The change of city government in 2019 was a step in the right direction for them.

“The previous mayor didn’t want to talk to us and now we participate in the city planning. There are still problems, the current administration wants to keep the natural area but it is a long process to overturn all the previous decisions”, says Kallo.

Similarly like in Zagreb, what years of working on common goals also achieved was a stronger connection between neighbours.

“Today we cooperate with locals, rowers, restaurant owners and other groups interested in this area and discuss how it should look in 20 years”, describes Kallo.

Meanwhile in Croatian capital we talked with Dobrić on the day the sign with a newly named park has been posted, a final assurance park is here to stay. The city council has officially declared it a park and it has been named after a famous actress from the beginning of the 20th century, Marija Ružička Strozzi. It was another victory for the citizens in the city where only few streets have been named after women.

For both initiatives their struggles brought a much needed sense of community in their neighbourhoods.

“Now citizens are also taking care of other issues in the neighbourhood, for example a school building that is not in a very good shape. As an organized community we can better defend our interests”, concludes Dobrić.

HOW TO JOIN THE MOVEMENT?