Budapest, April 28, 2021 – Greenpeace is going to court to stop the senseless destruction of nature at Lake Fertő. [1] The environmental organisation is demanding the repeal and annulment of the government’s latest scandalous decree justifying the project. According to its decision now being contested, the investor may continue to destroy wildlife at the Natura 2000 site, in the core area of a national park, along a lake shore protected under the Ramsar Convention. Greenpeace finds it outrageous that the government, acting on its own authority, is contributing to the destruction of our common natural values. 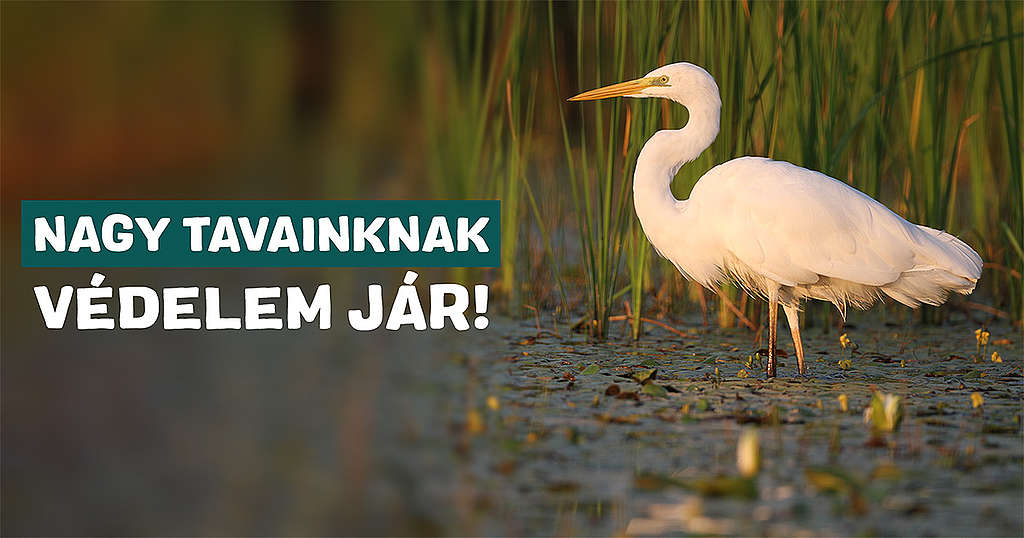 In support of the local civil initiative established for the protection of Lake Fertő, the Greenpeace Hungary Association filed a lawsuit with the Győr Tribunal on April 28, 2021 for the repeal and annulment of the administrative decision of the Győr-Moson-Sopron County Government Office, by which it amended its permission for a huge investment on the shores of Lake Fertő, an investment which will contribute to the further destruction of nature. [1]

According to Greenpeace, the decision of the government office violates the following domestic legislation and Hungary’s international commitments:

- the Basic Law of Hungary;

- the Government Decree on Natura 2000 sites;

- the Government Decree on the Protection of Wetlands;

- Hungary's commitments under the Ramsar Convention on Wetlands of International Importance, especially as Waterfowl Habitat.

Sopron-Fertő Turisztikai Fejlesztő Nonprofit Zrt is planning a mega-investment on about 60 hectares along the shore of Lake Fertő, in the core area of the Fertő-Hanság National Park and the UNESCO World Heritage Fertő Cultural Landscape, the Natura 2000 area, where it will construct 13.6 hectares of buildings and roads. This state-funded investment includes an indoor sports complex, an apartment house, a 100-room, four-star hotel, a car park for 880 vehicles, a multi-level visitor centre, a motel, a campsite, and a harbour for 850 sailing boats and 400 rowing boats.

The economic studies underlying this development are not known, and the investor’s own impact assessment states that no overriding public interest can be identified in connection with the development.

Already in September 2020, 73 NGOs protested against the investment in a joint statement. The statement emphasised that our great lakes, including Lake Fertő, are of paramount importance in Hungary, the European Union and around the world, so their natural values should not be sacrificed for short-term tourism or economic interests.

As the investment was declared to be of high national economic importance, civilians were not able to access in time the specific data concerning the investment. These could only be obtained after a significant delay and with great difficulty, through the National Authority for Data Protection and Freedom of Information. At the time, therefore, it was no longer possible to take substantive action against the decision.

Now Sopron-Fertő Turisztikai Fejlesztő Nonprofit Zrt has requested an amendment to the previous decision, so that it can carry out its dredging and shoreline conversion activities not only during the winter, but throughout the year. The government office partially approved the company's amendment with the following shocking justification: as a result of “the measures taken by the company, the construction area has become an unfavourable habitat for birds and mammals, no nesting specimens have appeared, (...) reptiles and amphibians have avoided the construction area".

“In the core area of a national park, it is unacceptable that the aim is to keep protected and highly protected birds, mammals, reptiles and amphibians away. And the resolution contributes to this outrageously, in violation of our laws. Once the government office has determined that the construction work has disturbed the area so much that the living creatures not yet eradicated leave their habitat, this same government office will then issue additional permits to destroy the area even more thoroughly,” declares Zoltán Kun, advisor at the Friends of Lake Fertő Association, concerning the absurdity of the situation.

“We find it outrageous and unacceptable that, in such a severe phase of the ecological and climate crisis, in our ever more arid country, despite the continued statements made by our president, János Áder, about the priority protection of our wetlands, such destruction of the habitat is taking place in actual practice. The economic benefits of narrow interest groups can override the importance of the survival of our entire nation and our living world, augmented by this decision of the government office,” says Dr Katalin Rodics, head of the Greenpeace Hungary biodiversity campaigns.

According to Greenpeace Hungary, the conscious destruction over more than ten years of the apparatus of nature conservation, and the complete cessation of any capability for advocacy, are evidenced by the fact that this application has been approved and authorised by the relevant government agency. This decision is therefore being challenged by the association. [1]

The Hungarian-language petition launched by local civilians to save Lake Fertő has so far been signed by nearly 9,000 people, while its German-language version has been signed by about 6,000. The organisers are waiting for more signatories to join.