Sofia,‌ ‌12 ‌October 2021‌ - "No jobs on a dead planet #2030" – this message, which stands for the call for environmental and social justice of workers around the world was projected to the facade of the Bulgarian Council of Ministers on Tuesday evening, October 12th. The demonstrations is meant to criticize the lack of ambition and honesty in the approach of the government in terms of the transition to renewable energy. 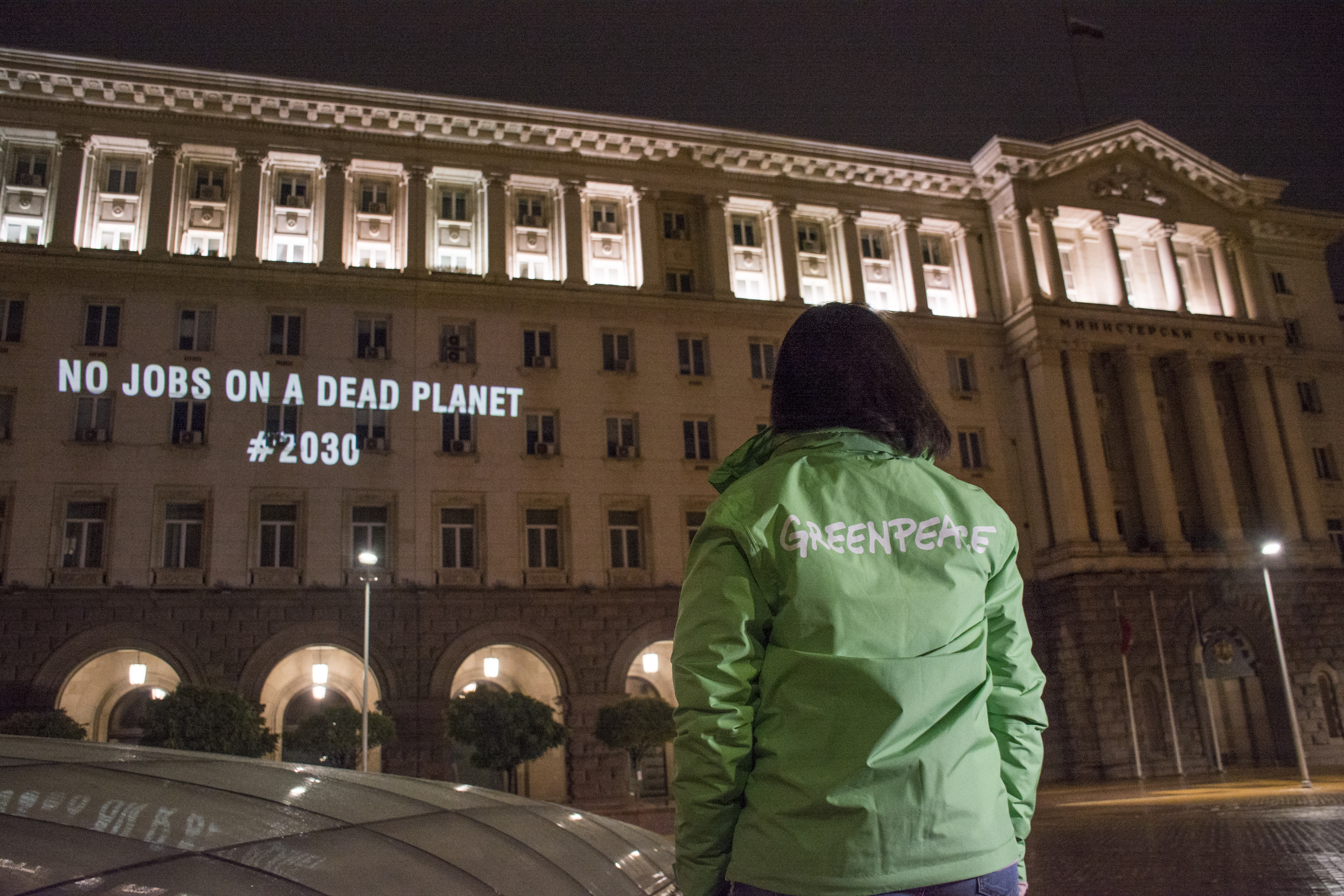 On the eve of a major coal workers’ strike in the capital Sofia, with the screening, Greenpeace Bulgaria activists upheld the renowned trade union slogan and reminded the Bulgarian government of its responsibility for a clear plan for energy transformation beyond coal with specific commitments to those employed in the sector and their role in the future development of the country's coal regions.

A laggard on decarbonisation and heavily addicted to coal, Bulgaria is once again failing to show ambition for meaningful and just transformation. While we need to transform the energy systems beyond coal dependence no later than 2030 to keep the rise of the global temperature below the 1.5 ℃ threshold, the Bulgarian government is expected to set a much later end date for coal - beyond 2035 and possibly even 2040 - a deadline jeopardizing the goals of the Paris Agreement and the European Union alike.

After years of missed opportunities, a proper plan for replacing existing coal capacities with renewable energy and storage, and a respective plan for a just transition to properly address the socio-economic implications are ever more important today. As the decision comes in the midst of an electricity price crisis and a prolonged political crisis in the EU’s poorest economy, the need for a well planned transition is pressing and should be prioritised by all politicians - in interim and regular governments alike.

"For Bulgaria, the energy transformation is also an exceptional opportunity to reject the oligarchic centralized models in the energy sector, where polluting industries not only poison people but also lock them in a vicious circle of choosing between a clean environment and а livelihood. A green transition is a chance to repair more than the climate in a country like ours", said Desislava Mikova, Climate and Energy campaigner of Greenpeace Bulgaria.

The transition beyond coal is an opportunity for many affected regions to take a breath of fresh air. For years, hundreds of people have been protesting against the deadly cocktail of fine dust particles, sulfur dioxide, mercury and other pollutants spit out of old polluting facilities, owned by offshore companies associated with the energy mogul Hristo Kovachki. Technically obsolete, they continue to function far beyond their operational life at the cost of air and water pollution in front of the authorities who seem to be powerless against fueling the climate crisis. 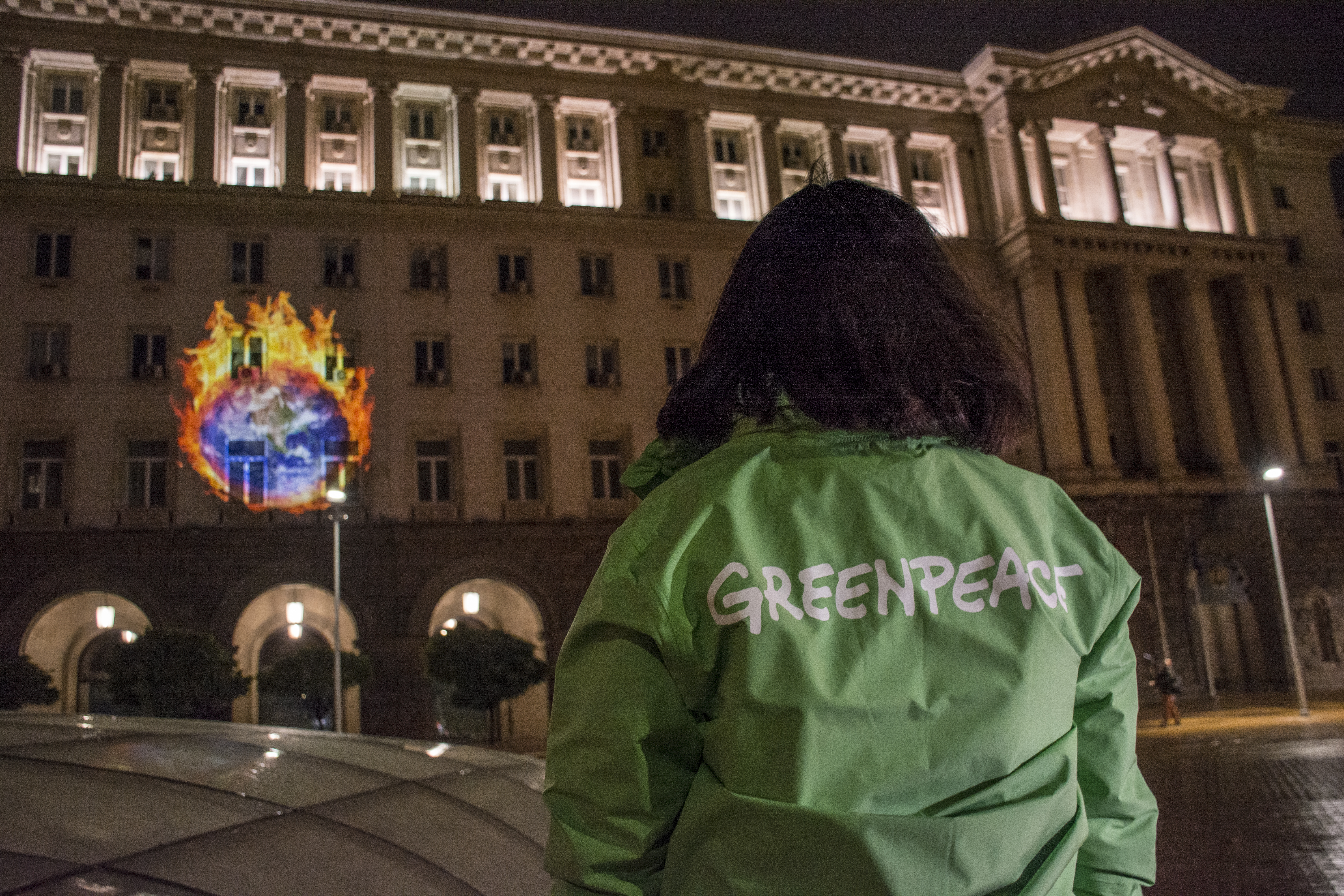 On the top of that, the largest coal-fired power plant - the state-owned TPP Maritza East 2 TPP, is practically bankrupt with debts of over BGN 1.5 billion and continues to operate thanks to political decisions to keep it afloat. The most recently built coal power plants - TPP AES - Maritza East 1 and TPP ContourGlobal - Maritza East 3 have long-term power purchase agreements, expiring in 2024 and 2026 respectively. It is unclear how competitive the prices of their coal electricity would be on a liberalized energy market. The dire economic situation for coal power generation is yet another strong argument for a meaningful transition by 2030. The 2030 phase out date is the only chance for workers for a just transition.