At the Adriatic Sea, Greenpeace sends a message to European leaders: ‘Peace not oil’

At the Adriatic Sea, Greenpeace sends a message to European leaders: ‘Peace not oil’

Croatia, 30th May 2022 - Since the beginning of the war in Ukraine, EU countries have spent 54 billions of euros on Russian oil, gas and coal. Ahead of the EU summit which starts on Monday, Greenpeace CEE with a peaceful protest called on political leaders to impose an immediate EU embargo on all Russian fossil fuels and to accelerate the transition to renewable energy and energy efficiency. On Sunday afternoon Greenpeace ship Rainbow Warrior protested in front of a tanker carrying Russian oil to the port of Omisalj in Croatia. 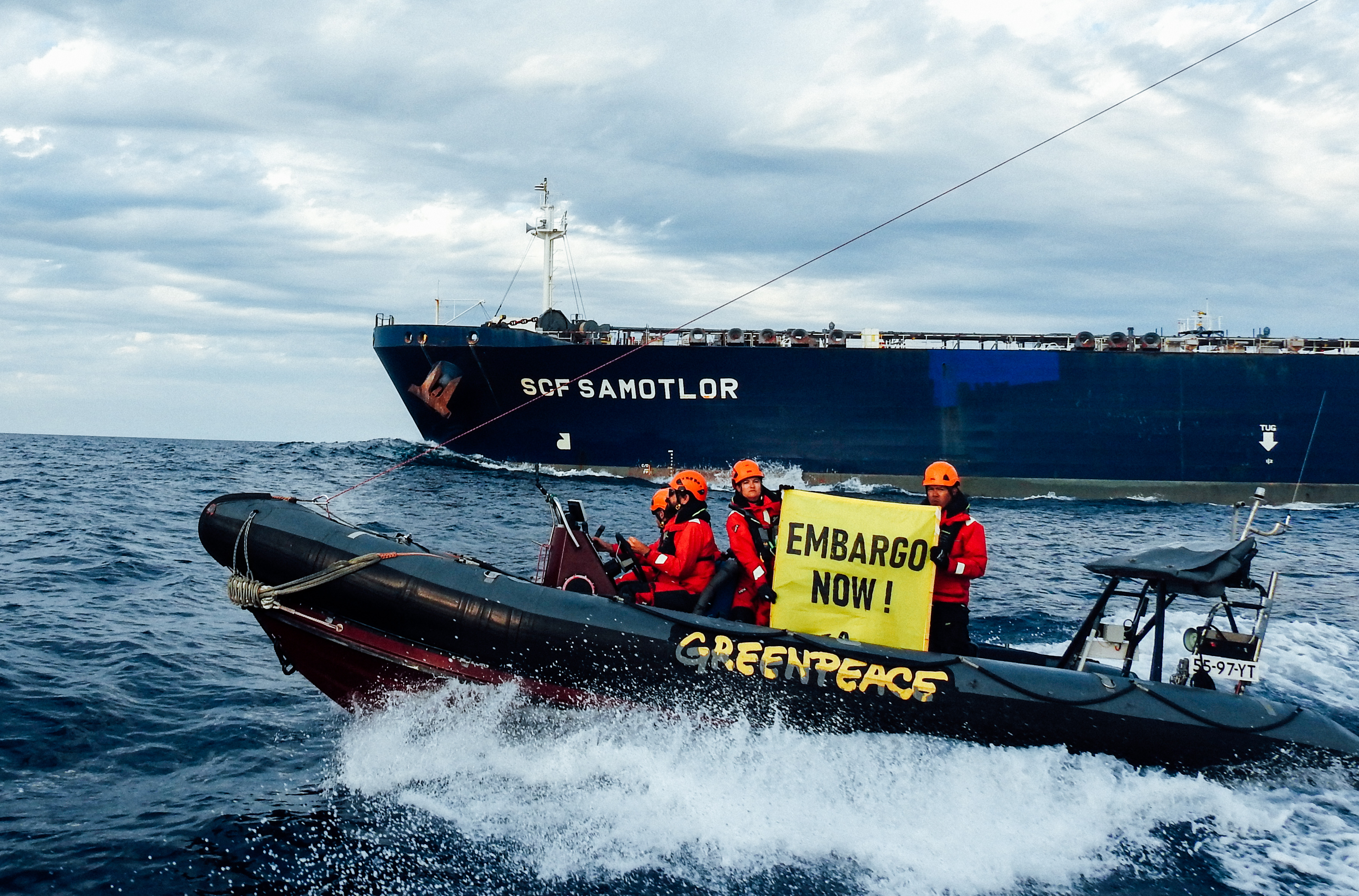 “Hundreds of millions of euros are still flowing from EU countries to the Kremlin in exchange for Russian fossil fuels and until now EU leaders have failed to impose sanctions that would effectively curb this immoral trade. Europe is still co-funding the war in Ukraine. This needs to stop now. The EU needs to finally show full solidarity and impose an immediate embargo on all Russian fossil fuels. Without delays, without legal loopholes, and without special treatment for any country,” says Eszter Matyas, campaigner at Greenpeace Central and Eastern Europe (CEE).

The peaceful protest took place just one day ahead of the EU summit, where – according to some sources – EU countries are to discuss the embargo on Russian oil. The European Commission has proposed phasing out Russian oil imports not sooner than by the end of the year in most EU member states. Some countries like Hungary, Slovakia and Bulgaria could be given even more time. Recent comments by Ursula von der Leyen show that EU leaders are nowhere near agreement. 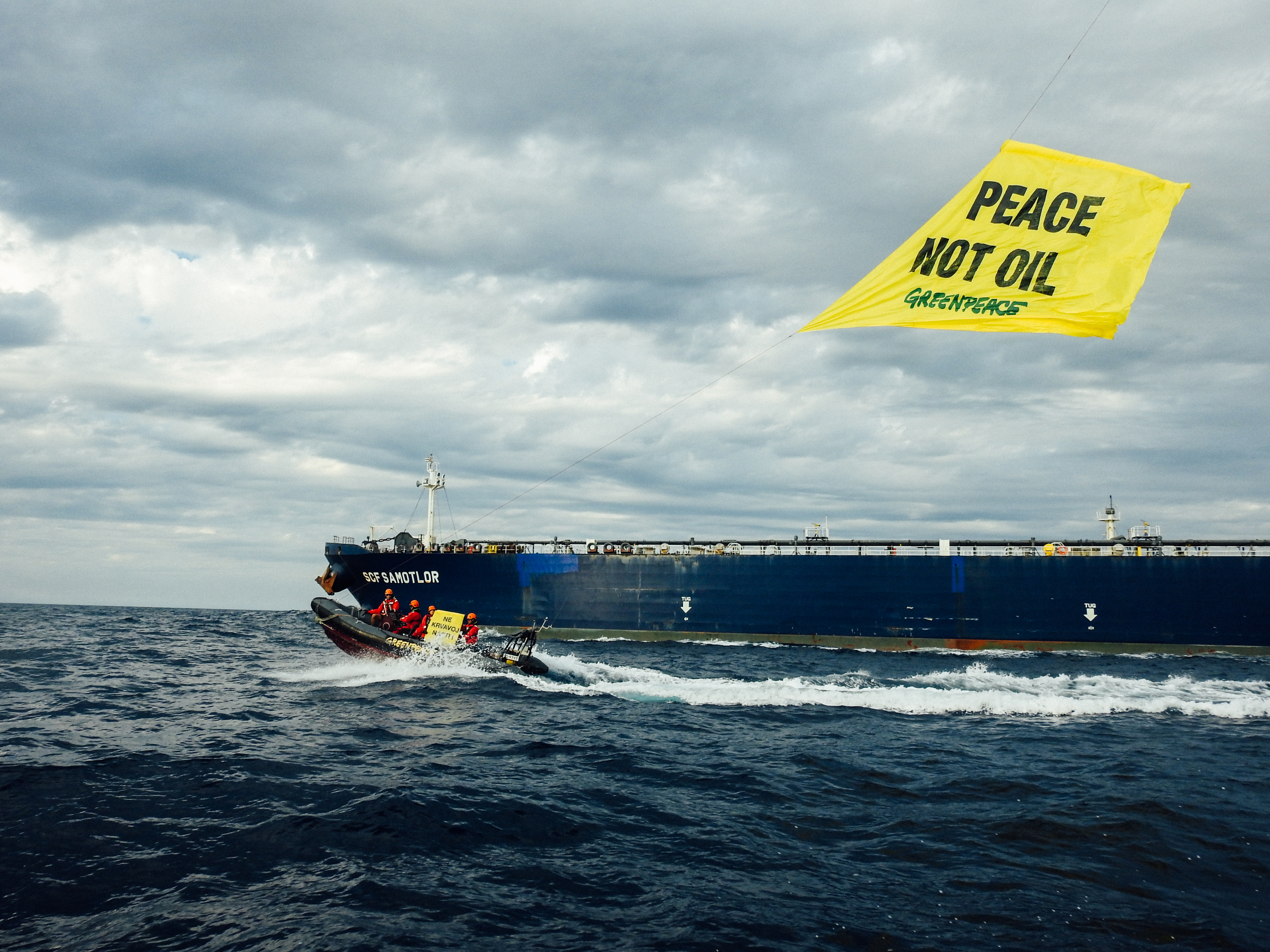 “Humanitarian disaster in Ukraine will only deepen if a poor embargo or no embargo at all will be decided at the summit. War in Ukraine should also be a wake-up call for European leaders. We will never be safe in a world fuelled with fossil fuels. Immediate ban on all Russian fossil fuels should and can trigger higher ambitions in developing renewables and energy efficiency in Europe. It is for the sake of climate security, but also major independence from other autocracies trading fossil fuels,” says Eszter Matyas from Greenpeace CEE.

Transport is the largest consumer of oil in the EU and the EU is dependent on imports for 97% of its oil products. Research commissioned by Greenpeace Belgium offers a roadmap for decision-makers to decarbonise the European transport sector by 2040, powering it with renewable energy without relying on biofuels. The International Energy Agency recently said that a limited set of short-term measures in the transport sector could cut 2.7 million barrels of oil a day within the next four months. In Germany, short-term measures could cut Russian oil imports by about a third.